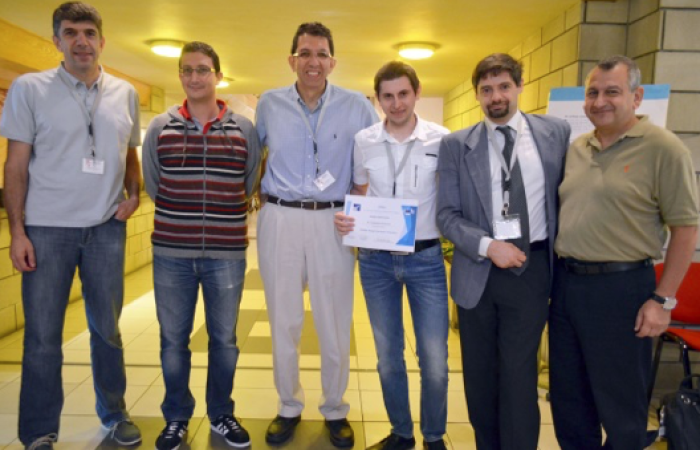 A number of young talented researchers working in the KIOS Research Center for Intelligent Systems and Networks at the University of Cyprus have won significant prizes in technology competitions specifically targeting young people. Prizes include the international CIPRNet Young CRITIS Award (CYCA), a 1st prize in the Cyprus Digital Championship 2015, and a 2nd prize in the Hack Cyprus Hackathon organized by the Cypriot Enterprise link.

These successes are positive indicators that there is an inquisitive and growing research culture among young Cyprus-based scientists.

Constantinos Heracleous, a Ph.D. student at the Department of Electrical and Computer Engineering of the University of Cyprus and a researcher at the KIOS Research Center for Intelligent Systems and Networks, has received the inaugural CIPRNet Young CRITIS Award (CYCA) during the 9th International Conference on Critical Information Infrastructures Security (CRITIS 2014) which held on October 13-15 2014 in Limassol, Cyprus.

The award, sponsored by the EU FP7 Network of Excellence CIPRNet, is given to young researchers (less than 32 years old) for outstanding research in Critical Infrastructure security and protection , following a competitive selection process.

The awarded paper that was submitted to the CRITIS 2014 conference and won the CYCA competition is entitled “Critical Infrastructure Online Fault Detection: Application in Water Supply Systems” and presents an online fault detection algorithm capable of detecting faults in critical infrastructures effectively and efficiently .

Young KIOS researcher Konstantinos Koumidis won 1st prize in the Young Student Entrepreneurship category of the national Digital Championships 2015. Konstantinos won the prize for the development of a smartphone application that enables communication between devices without the need for any infrastructure support (dubbed ProximAid in the Google Play Store). The system is pa

rticularly useful in emergency situations when normal communication networks are not functioning.

Two young scientists from the KIOS Research Center Undergraduate Research Opportunities Program, won 2nd prize with their team at the 4th annual HackCyprus {Hackathon} Contest. The contest is being held annually by the Cypriot Enterprise Link, and attracts participation of code developers from the entire island. This year, there were approximately 100 contestants comprising 30 teams.

Andreas Pallis and Andreas Kouloumbris, along with their fellow students of the Department of Electrical and Computer Engineering, George Makris and George Plastiras, worked endlessly for 48 hours in designing and developing an automated paper document archival system.

The team, called F. I. F. S. (First In First Sort), developed a system which receives as input miscellaneous paper documents that are subsequently read (through optical character recognition), analyzed, classified, and archived on a computer. Besides electronic archiving, the documents are also sorted in real time in corresponding paper placeholders.

FixCyprus: A platform and mobile app to improve the Cyprus road network infrastructure and road safety