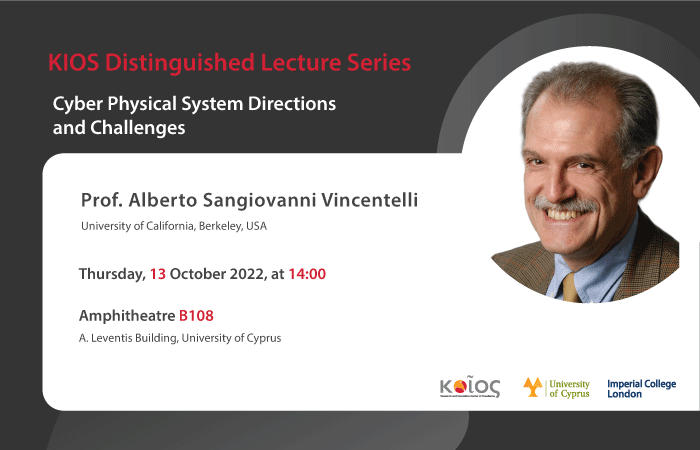 The KIOS Research and Innovation Center of Excellence at the University of Cyprus is pleased to announce the lecture of the internationally recognized Professor Alberto Sangiovanni Vincentelli, from the University of California at Berkeley, USA.

The lecture entitled “Cyber Physical System Directions and Challenges” will take place on Thursday, 13 October 2022, at 14:00 (Cyprus time), in Amphitheater B108 (A. Leventis Building), University of Cyprus. The lecture will also be accessible online, via Zoom: https://ucy.zoom.us/meeting/register/tJMsc-6rrTIsEtPaGVMqNn0iXpMeombKgyB2

Cyber physical systems (CPS) are the most compelling example of the convergence of different disciplines: from electronics, to software, control and communication. An extension of CPS are the so called Bio CPS where biology is also playing a fundamental role in the future of industrial and research opportunities. We are going to discuss trends in this domain with particular attention to the role and the limitations of AI and machine learning and a peek at the evolution of Bio CPS.

Alberto Sangiovanni Vincentelli is the Edgar L. and Harold H. Buttner Chair of Electrical Engineering and Computer Sciences at the University of California at Berkeley. In 1980-1981, he was a Visiting Scientist at the Mathematical Sciences Department of the IBM T.J. Watson Research Center. In 1987, he was Visiting Professor at MIT. He is an author of over 800 papers, 17 books and 2 patents in the area of design tools and methodologies, large scale systems, embedded systems, hybrid systems and innovation. He was a co-founder of Cadence and Synopsys, the two leading companies in the area of Electronic Design Automation and the founder and Scientific Director of the PARADES Research Center in Rome.

Major Honors • In 2001, he was given the Kaufman Award of the Electronic Design Automation Council for “pioneering contributions to EDA”. • In 2008, he was awarded the IEEE/RSE Wolfson James Clerk Maxwell Medal “for groundbreaking contributions that have had an exceptional impact on the development of electronics and electrical engineering or related fields” with the following citation: “For pioneering innovation and leadership in electronic design automation that have enabled the design of modern electronics systems and their industrial implementation” • In 2009, he received the first ACM/IEEE A. Richard Newton Technical Impact Award in Electronic Design Automation to honor persons for an outstanding technical contribution within the scope of electronic design automation. • In 2012, he received the Lifetime Achievement Award from EDAA. • He has been a Fellow of the IEEE since 1982, a fellow of the ACM since 2014, and a Member of the National Academy of Engineering, the highest honor bestowed upon a US engineer, since 1998.

This lecture is open to the public and is part of the KIOS Distinguished Lecture Series for 2022, a series of lectures that hosts world-class researchers who are specialized in technology and innovation fields.

More information and details about the lecture can be found here.

Project Meeting and Workshop on the Erasmus Project, CybPhys

FLEXITRANSTORE project: Groundbreaking technologies for the evolution of the European power system

A Distinguished Lecture in Memory of Prof. Elias Kyriakides