Privacy and security in mobile devices are one of the most pressing and unaddressed problems, as the number of data leakage/breaching incidents has been growing over the past few years. Malloc, a Cypriot-based software startup founded by three KIOS Center of Excellence Alumni, developed a software solution that protects users’ data by safeguarding their mobile devices against unauthorized or unattended data recordings or transmissions.

KIOS Alumni, Dr. Maria Terzi, Dr. Liza Charalambous, and Dr. Artemis Kontou, having expertise in the areas of Artificial Intelligence, Cyber Security, Software Engineering, and Innovation Management, joined forces to help people and enterprises to protect their data and regain their privacy. In collaboration with the KIOS CoE, they received pre-seed funding from the Cyprus Research and Innovation Foundation (RIF) and then attracted the eyes of American investors, raising close to $2 million in seed funding from Y Combinator and the Urban Innovation Fund in less than a year.

On the 21st of March 2022, the KIOS CoE organized an event in which the three entrepreneurs presented their product and its market potential to researchers, students, academics, and entrepreneurs and shared their experiences, key moments, and lessons learned from this successful journey.

From an idea to a working app

The startup, called Malloc, was founded by three KIOS Alumni in 2020, after receiving pre-seed funding from the Cyprus Research and Innovation Foundation, within the framework of the program for “research, technological development and innovation Restart 2016-2020”, in collaboration with the KIOS CoE. The funding supported the creation and initial development of startups within international orientation. Through the initial pre-seed funding received by the Cyprus RIF, Malloc succeeded in developing Antistalker Mobile Security: a mobile app which notifies the user when any other application uses its microphone or camera or if data are being transmitted without its permission or being collected by tracking and spyware services.

Malloc’ s Chief Operation Officer (COO), Dr. Artemis Kontou, talked about the cyber-security market, pointing out that 28% of enterprises worldwide were impacted by cyberattacks that involved mobile devices in 2019 and that consumer mobile security app market size is estimated to reach $6.6 billion by 2026. Having this in mind, said Dr. Kontou, Malloc developed an app for consumers and businesses, aiming to protect users from surveillance threads. At this moment, the Malloc’s Antistalker Mobile Security app is available on Google Play for Android mobile devices and has 100,000 active users, she added.

The Chief Executive Officer (CEO) of Malloc, Dr. Maria Terzi, referred to the challenges, experiences, lessons learned as well as the key milestones of Malloc’s success, including the collaboration with the KIOS CoE and the pre-seed funding from RIF, the participation in the Bank of Cyprus IDEA incubator-accelerator and entrepreneurship hub, the 1st price of the University of Cyprus Entrepreneurship Competition, joining Y Combinator, and finally the securing of almost $2m seed funding from Y Combinator,  the Urban Innovation Fund and other accredited US funds and angel investors.

Dr. Terzi, also referred to Malloc’s future, mentioning that the company plans to launch the iOS version of the app soon, while at the same time it is working on the development of an SDK library, which other companies can use to protect their mobile apps from hacking attacks, prevent data leakages and generally protect the data and digital assets of their users.

The event provided inspiration and gave valuable lessons to other young entrepreneurs who want to progress in their fields, as it was evident by the lively discussion between the Malloc team and the audience that followed the presentations. 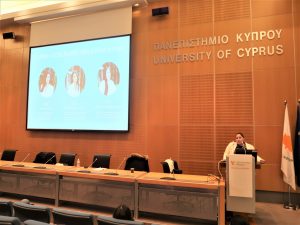 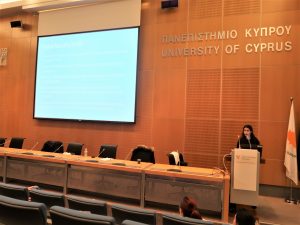