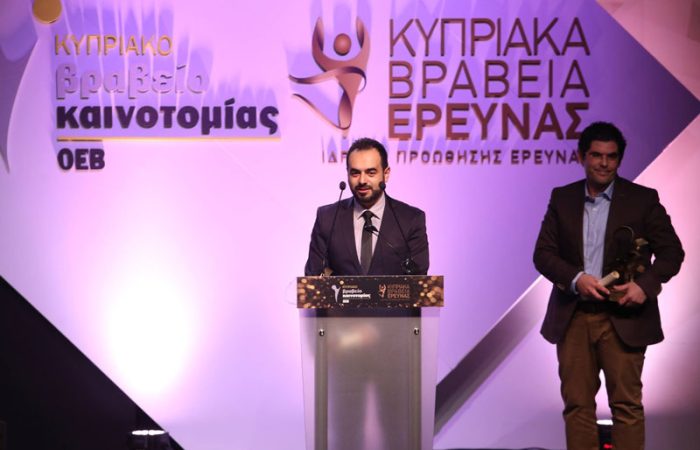 Dr. Konstantinos Manousakis, a Research Associate at the KIOS Research and Innovation Center of Excellence (KIOS CoE) of the University of Cyprus (UCY), has received the “2018 Young Researcher Award” from the Cyprus Research Promotion Foundation.

This is the second consecutive year that a researcher at KIOS CoE wins the Cyprus Young Researcher Award from the Cyprus Research Promotion Foundation, under the Physical Sciences and Engineering category.

Dr. Manousakis recent research work has focused on providing security for next-generation optical networks against physical layer attacks, through a Marie Curie Career Integration Grant (MC-CIG) for the period 2014-2018. This grant supported a project entitled “Security enhancement of optical network logical design” (SHIELD), hosted by the KIOS CoE, UCY. Its main objective was to provide flexibility in the utilization of resources in order to minimize the capital expenditures (CAPEX) and operational expenditures (OPEX) of the backbone optical networks, such as monetary cost and power consumption, while at the same time offering network security against physical layer attacks.

As part of the project’s outreach activities and to promote the research of the SHIELD project to the wider public, Dr. Manousakis also designed and developed a board game called “Light the Path”, in which players compete to connect different cities across Europe through lightpaths (paths and colors) according to collected cards. This board game attracted the curiosity of elementary and high school students during the 2016, 2017 and 2018 “Researchers Night” organized by the Cyprus Research Promotion Foundation, and gave the opportunity to Dr. Manousakis to explain to the students the operation of optical networks.

Dr. Manousakis holds a Diploma (2004) in Computer Engineering and Informatics from the University of Patras, Greece, as well as an MSc (2007) and a PhD (2011) from the same department. He has extensive research experience in the field of optical networks and optimization algorithms. Overall, Dr. Manousakis has participated in numerous research projects in this area, where he acquired extensive knowledge in integer linear programming (ILP) techniques, design of algorithms, physical (optical) layer impairments, multicasting, security techniques and resource management.

The research quality and importance of the scientific output of his work is reflected by his publications at a large number of quality journals and international conferences in the area of optical networks. His work has received a number of awards including a best paper award at CRITIS’2013. He has also received an IEEE/OSA Journal of Lightwave Technology outstanding reviewer award (2016) and he is a Marie Curie Fellow.

The Award Ceremony for the Cyprus Innovation and Research Awards 2018 took place on Monday, November 26th 2018, at the Cyprus Theatrical Organization premises in Nicosia, during which the awards were presented by H.E. the President of the Republic of Cyprus, Mr. Nicos Anastasiades. The event was co-organized by the Cyprus Research Promotion Foundation and the Cyprus Employers & Industrialists Federation (OEB), with the support of the Ministry of Energy Commerce Industry & Tourism.

Distinguished Lecture by Prof. Dimitrios Tzovaras at the KIOS Center of Excellence