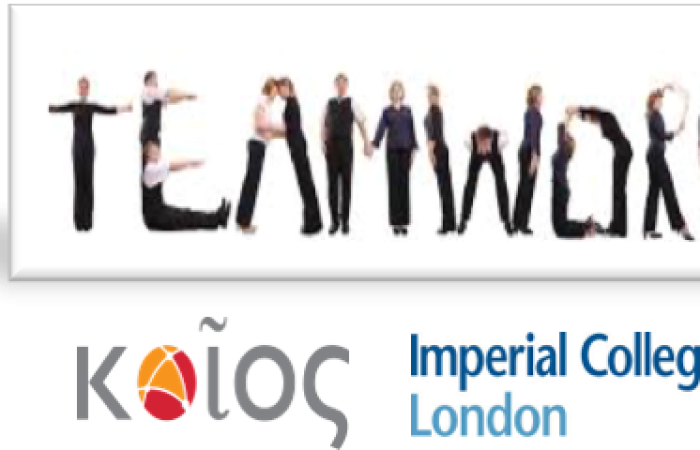 The KIOS Research Center and Imperial College London have recently submitted an ambitious proposal for a significant upgrade of the KIOS Research Center to a world-class Center of Excellence. The proposal was submitted within the framework of HORIZON 2020 under the TEAMING Phase 2 call, which is part of EU’s strategic program “Spreading Excellence and Widening Participation”. The TEAMING program was introduced to respond to the significant internal disparities in terms of research and innovation output amongst the member states of the EU. The aim was to introduce specific measures to help low-performing Member States to establish world-class Centers of Excellence that will help improve their research and innovation performance.

The specific aim of the Phase 1 TEAMING project was to prepare a business plan for a Center of Excellence by creating partnerships between internationally leading institutions from high-performing Member States, in terms of research, and institutions from low-performing Member states with the most potential to pursue excellence. The KIOS Center of Excellence proposal, a joint collaboration between the University of Cyprus and Imperial College London, was one of 31 proposals selected (out of 169 submitted) from across the EU. It was a significant achievement for the KIOS Research Center to be selected, as well as for Cyprus, as three of the 31 successful proposals originated from Cyprus. Upon the completion of Phase 1, the KIOS consortium submitted the Phase 2 proposal aimed at implementing the developed business plan, subject to a competitive assessment by an international expert panel. The highest ranked proposals will be provided with substantial financial support for initiating the implementation phase of the proposed Centers of Excellence in Europe. After the initial evaluation of the Phase 2 proposals, the KIOS Center of Excellence team has recently been invited to the hearings stage.

As part of Phase 1, the KIOS team prepared a robust Business Plan with the vision of transforming the KIOS Research Centre into a world-class Centre of Excellence for research and innovation. The experience cemented a long-term and sustainable partnership between the advanced institution, Imperial College London, and the University of Cyprus. With the help of Imperial’s Enterprise Division, whose expert staff joined the TEAMING effort, a Business Plan was compiled which highlighted the significant benefits, to Cyprus and to Europe, from a substantial upgrade of the KIOS Research Center.

The TEAMING project provides a unique opportunity for establishing a sustainable research and innovation center of excellence —the first such Center in Cyprus― which will stimulate the creation and growth of a regional industrial ecosystem with major economic and societal benefits. In the long-term, the foreseen impacts are to strengthen the Center’s scientific and innovation abilities, and enable KIOS to improve its chances to seek and secure further research funding, through international and EU programs, or direct investment by government organizations and industry in research and innovation. Moreover, the long-term vision focuses on financial stability which is critical in order to create a sense of security for its employees and allow successful recruitment of the most highly qualified personnel. The TEAMING process was an excellent opportunity for the University of Cyprus and Imperial teams to consult, deliberate, and brainstorm, as well as to collaborate with industrial and educational partners both in Cyprus and abroad, to form the roadmap that would lead to an ambitious vision of KIOS in the future. A key valuable benefit of the work for the TEAMING business plan and proposal submission process was the opportunity to apportion a significant amount of time to consider the long term future of the KIOS Research Center and the needs of its local partners including industrial partners, government authorities, and SME’s.

In closing, the KIOS Team would like to take this opportunity to thank everyone involved in supporting the TEAMING proposal since the contributions of each and every member was critical in submitting a competitive proposal.

“The project has received funding from the European Union’s Horizon 2020 research and innovation programme under grant agreement No 664638/ 664639”.